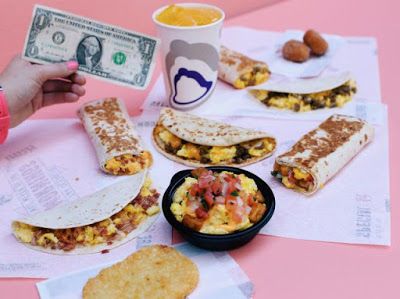 Katherine Pendrill — March 10, 2016 — Lifestyle
References: tacobell & brandeating
Share on Facebook Share on Twitter Share on LinkedIn Share on Pinterest
In an efforts to drawn in more customers during the morning hours, Taco Bell is officially launching its '$1 Morning Value Menu.' While many fast food restaurants offer discount menus, consumers are often limited to entrees such as burgers and fries. Now there is a breakfast option for hungry consumers who don't want to break the bank first thing in the morning.

The new $1 Morning Value Menu consists of 10 different items, each of which costs just $1. Four of the items on the menu are new breakfast dishes, which include the Bacon Breakfast Soft Taco, the Sausage Breakfast Soft Taco, the Mini Skillet Bowl and the Sausage Flatbread Quesadilla. The rest of the menu consists of existing breakfast dishes such as the Bacon Grilled Breakfast Burrito and the Cinnabon Delights.

The inexpensive breakfast menu demonstrates one of the many ways that Taco Bell is working to make itself a go-to breakfast destination.
3.9
Score
Popularity
Activity
Freshness
Attend Future Festival