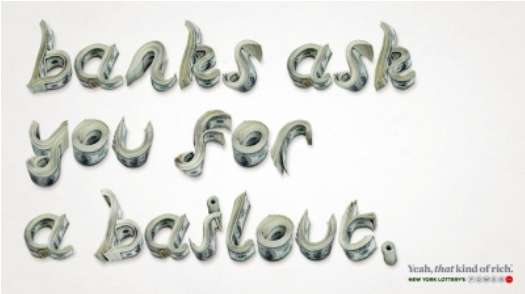 The ‘Yeah, That Kind of Rich’ Ad Campaign Embodies a Lucrativ

In a sly attempt to help the public wrap their heads around how the lottery money could change their lives, the campaign released posters with slogans like “Banks ask you for a bailout,” or “You shop, the market rises.” Using dollar bills to create thick stacks of money, the letters in these one-liners were created using a super rich font. It is estimated that around $1,000 to $1,500 dollars worth of money was used to create each ad.

These comical posters can be seen on buses, shelters and in subway stations in New York.