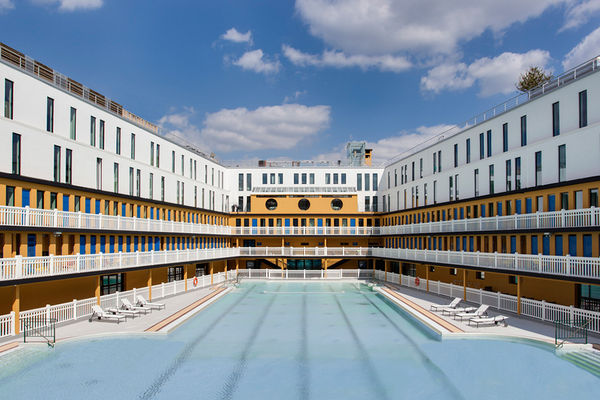 The Molitor Hotel Has Been Restored to its Former Glory

Vasiliki Marapas — May 26, 2014 — Art & Design
References: mltr.fr & highsnobiety
The Piscine Molitor was one of Paris' most popular swimming baths, admired for its beautiful Art Deco style. The Molitor first opened in 1929, and had an impressive run until it closed in 1989. After its closure, the pool tragically fell into total disarray.

Now, thanks to French hotel brand Accor, the Molitor has been returned to its former grandeur. The baths have been expanded to include a two-storey hotel, which gazes out towards the pool complex. If you're a member of the private members club, you have access to the breathtaking rooftop terrace.

Not one to mess with a good thing, the designers made sure to stick to the original Art Deco style -- they even managed to restore the pool's stained glass windows. Inside, the rooms feature a monochromatic design by Jean-Philippe Nuel, and are fully equipped with luxuries like a Bose sound system and espresso makers.
3.4
Score
Popularity
Activity
Freshness