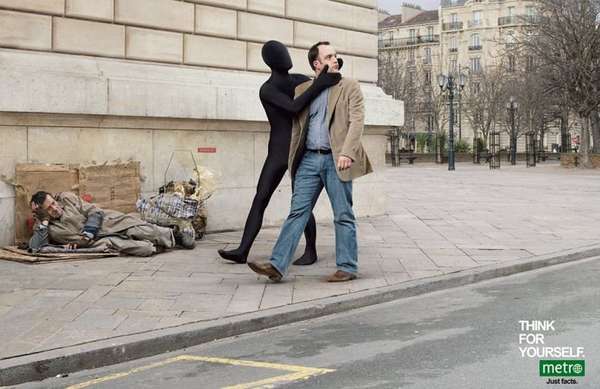 Metro 'Think for Yourself' Campaign

In the first Metro ad image for "Think for Yourself," for example, the black-clad figure directs the man's attention away from the homeless individual on the street. The black-clad figure also helps people pray, throw Molotov cocktails and spray-paint graffiti.

The message of the Metro Newspaper "Think for Yourself" ad campaign is that Metro simply provides the facts, so that readers can decide their opinions and beliefs on their own. The vague nature of the ads has inspired abundant Internet rumors from readers who interpret the ads to question authority, stray from or towards religion, and to fight 'the man.'
2.5
Score
Popularity
Activity
Freshness
View Innovation Webinars