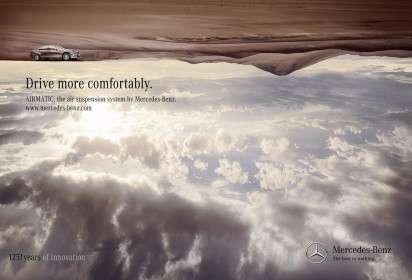 Meghan Young — April 2, 2012 — Autos
References: jvm-neckar.de & ibelieveinadv
Share on Facebook Share on Twitter Share on LinkedIn Share on Pinterest
The Mercedes-Benz Airmatic ad campaign will have people crying out like Chicken Little, "The sky is falling!" In this case, the sky hasn't fallen. Instead, the epic landscape has been inverted for a surreal interpretation of the luxury car's air suspension system. Basically, the ad campaign shows that with this exceptional service, people will feel like they are driving on air and not concrete roads, desert sands, grassy fields or dirt paths.

Conceived and executed by Jung von Matt/Neckar Bewegungsmelder, an ad agency based in Germany, the Mercedes-Benz Airmatic ad campaign is a simple concept with a beautiful outcome. Art directed by Mark Raeke with creative direction by Holger Oehrlich and Philipp Barth, the Mercedes-Benz Airmatic ad campaign was post produced by Fabian Stehle of Recom.