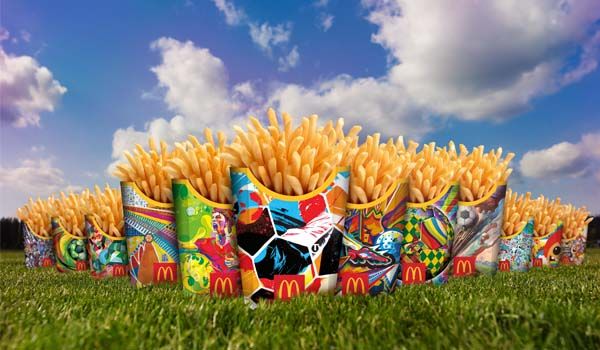 Rahul Kalvapalle — May 20, 2014 — Lifestyle
References: news.mcdonalds & adage
The World Cup is the showpiece event of the world's most popular sport so it's understandable that it would have a significant impact on products and product design; however, few would have expected McDonald's World Cup redesign. The fast food giant is about to roll out new medium and large fry boxes decorated with special World Cup-themed artwork.

McDonald's reviewed the work of 500 artists around the world, before challenging 24 of them to create "exceptional interpretations of the glory of the beautiful game." The resulting artwork will be displayed on the new fry boxes, which will be in 119 markets by the time the World Cup begins on June 12.

The new fry boxes will also serve as a portal to an augmented reality McDonald's World Cup game. Customers can download McDonald's GOL! mobile app and use it to scan their fry box, launching the game. A soccer field then appears on their smartphone screen, with players flicking their fingers on the screen to try and get the ball into the fry box-shaped goal.
3.8
Score
Popularity
Activity
Freshness