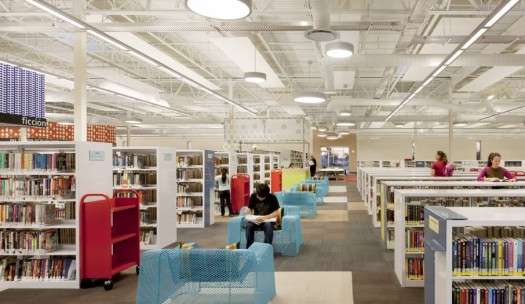 Meghan Young — June 29, 2012 — Art & Design
References: dev.msrltd & psfk
Share on Facebook Share on Twitter Share on LinkedIn Share on Pinterest
An abandoned Walmart department store was admirably transformed into the McAllen Public Library after the city inherited it once it became clear no one was moving in to take new ownership of the space. With the help of Meyer, Scherer & Rockcastle, Ltd., an architectural studio based in Minneapolis, the interior design underwent a drastic facelift that nevertheless followed three guiding words: functional, flexible and affordable.

Turning the dingy, barren space into a modern and vibrant haven for books, the McAllen Public Library was selected by the International Interior Design Association as the winner of their 2012 Library Interior Design Competition. Considering that the 124,500 square foot space is huge for a library, it can now lay claim to being the largest single-story location in the U.S.
3.4
Score
Popularity
Activity
Freshness
Get the 2021 Trend Report FREE