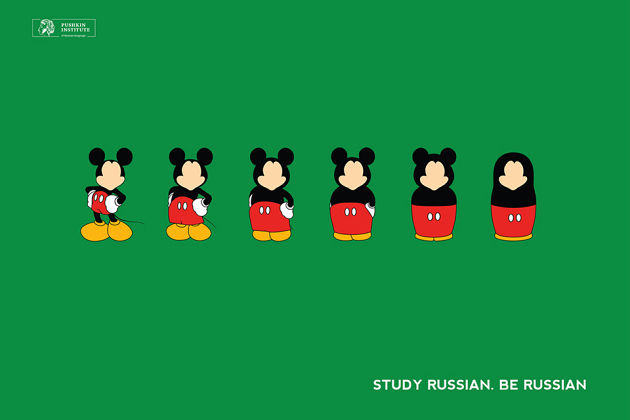 These Matryoshka Dolls Ads for the Pushkin Institute are Highly Effective

Rebecca Byers — February 19, 2015 — Marketing
References: behance.net & highsnobiety
The Pushkin Institute recently commissioned Moscow-based graphic designer Ira Smolikova to create a series of ads that communicated the prestigious reputation of one of Russia's premiere language schools. Included in the series is Mickey Mouse, Hello Kitty, as well as images of a London phonebooth and the Leaning Tower of Pisa.

Smolikova decided to go with a clever campaign that will resonate well with consumers, referencing both pop cultural tokens, landmarks and the Russian matryoshka dolls. Each print features a culturally iconic image slowly morphing into the shape of the traditional Russian dolls, which were also employed as one of the primary images representing Russia during the Sochi 2014 Olympics.

The highly effective ads suggest that in matriculating with the Pushkin Institute, everyone becomes "a little bit Russian."
5.4
Score
Popularity
Activity
Freshness