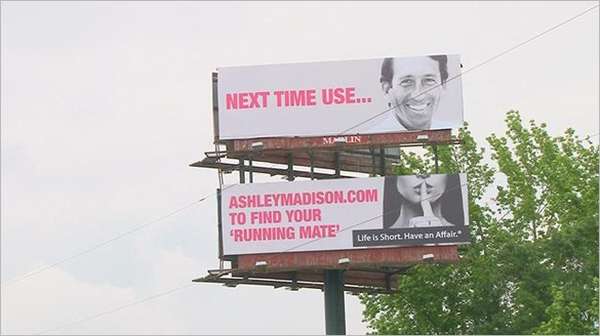 Ashley Madison Calls Out Mark Sanford With Its Latest Ads

Ryan Fowler — May 2, 2013 — Marketing
References: ashleymadison & adweek
Mark Sanford, the former governor of South Carolina, has had his share of issues with scandal in his personal life. Ashley Madison doesn't get political unless there's a romance scandal to exploit, so in its best interest, they jumped all over Mark Sanford and his current political situation.

Ashley Madison is a discreet dating site for married or partnered men and women to hook up. They have created a slightly inappropriate yet very effective advertising billboard that has used the former governor's situation to promote the benefits of using the site. The clever billboard in his home state of South Carolina that says, "Next time use AshleyMadison.com to find your running mate."

Although this is putting the politician in a really tough spot, the billboard is a great example of extremely clever advertising that will not only grab the attention of passers by but millions with the free online publicity the piece receives.
4.5
Score
Popularity
Activity
Freshness