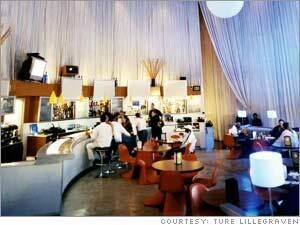 In 1946, the average American went to the movies 28 times per year; the number has since fallen to less than five times per year. There is simply too much competition from high-end home theatres, early DVD releases, pirated copies and other forms of entertainment.

National Amusements is fighting back and differentiating itself with a 14-screen Cinema De Lux (CDL) which goes far beyond the suburban megaplexes we've already seen. With a martini bar and grand piano gracing its lobby, the CDL is the five-star venue of the theatre industry. The CDL also features a Ben & Jerry's and a Starbucks. There's a lounge with comfortable couches, newspapers and magazines, and a concierge who assists in purchasing tickets and calling taxis.

As for the theatres themselves, two of them actually feature luxury leather recliners and escorted seating service. Alcohol may eventually be served in the theatres.
6.2
Score
Popularity
Activity
Freshness
Get Better and Faster