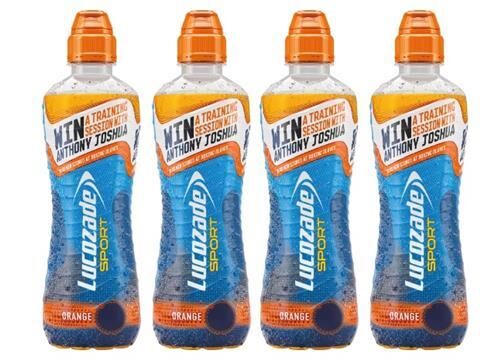 Lucozade Sport is Offering the Chance to Train with Anthony Joshua

Michael Hemsworth — October 23, 2020 — Marketing
References: lucozadesport & conveniencestore
Share on Facebook Share on Twitter Share on LinkedIn Share on Pinterest
Lucozade Sport has announced it will be offering consumers the chance to train with professional boxed Anthony Joshua as part of a new on-pack promotion. The promotion will be ran across more than five million 500ml bottles of the brand's orange, raspberry and fruit punch refreshments, and only requires consumers to enter a code online for a chance to win. The promo will be running between November and January in order to tie in with Joshua's upcoming heavyweight title fight that will take place in December.

Head of Marketing Tom Bell spoke on the promotion saying, "The partnership between Anthony Joshua and Lucozade Sport has proved irresistible to shoppers over the past couple of years. In the past year, Lucozade Sport fruit punch - featuring Joshua on pack - has driven sales of almost £8m - making it an important pillar of the £112m Lucozade Sport brand [EXT IRI MarketPlace GB, latest 52-week data ending 23.08.20]. The insight behind on-pack prize offers shows consumers who perceive they have a good chance of winning are more likely to enter, hence the additional 20 pairs of signed gloves driving entries and purchase."
3.6
Score
Popularity
Activity
Freshness
Get Better and Faster