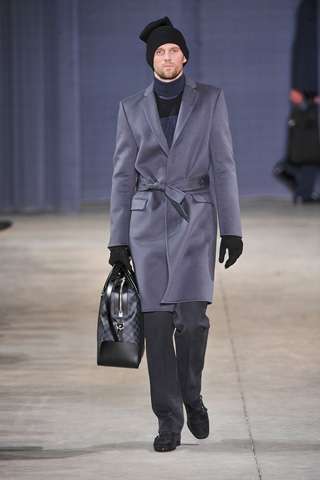 Bianca — January 24, 2009 — Fashion
References: men.style
Share on Facebook Share on Twitter Share on LinkedIn Share on Pinterest
The Fall 2009 Louis Vuitton men's Paris show could well have been a catwalk interpretation of the economic crisis. Men in suits, briefcases in hand, walked the runways looking somewhat scruffy, their expressions hopeless. Each LV model had a briefcase in hand, as if walking from his job, bag in hand, or perhaps en route to deliver yet another job application on a wintery Wall Street day.

Bundled up in jackets, high necklines and some in hats, the Louis Vuitton Fall 2009 men's show was a great way to showcase some of the brand's newest briefcases, bags and winter gear, while remaining relevant to global events and establishing an emotional connection with those affected by the hardships of the economy.
2.2
Score
Popularity
Activity
Freshness
Jeremy Gutsche Keynote Speaker