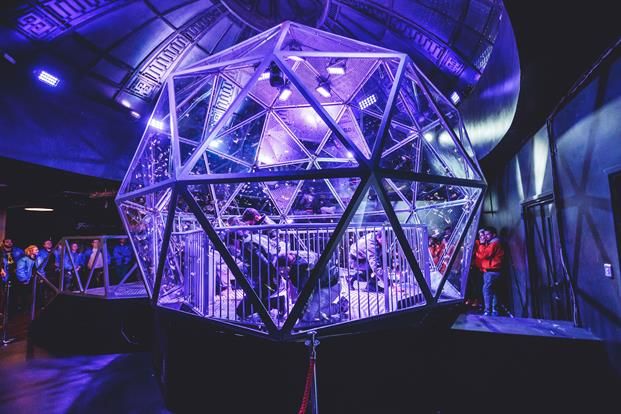 Rebecca Byers — March 10, 2016 — Marketing
References: eventmagazine
Share on Facebook Share on Twitter Share on LinkedIn Share on Pinterest
This London Crystal Maze pop-up is an immersive experience that will delight fans of the 1990s game show. Located in Angel in London, the event featured guests being guided by a Maze Master, who takes them through the various Aztec, Medieval, Industrial and Futuristic zones of the pop-up.

Guests were invited to search the Crystal Maze for Golden Freixenet Tokens, for which they were rewarded with a glass of champagne. Two Freixenet-based cocktails were created especially for the event, the Freixenet Industrial and the Freixenet Futuristic.

The event came into existence after an initial crowdfunding campaign, while the event even includes a hologram of the show's original host Richard O'Brien. The Freixenet-sponsored London Crystal Maze event was organized in a collaboration between four agencies: Artem, MDM, Helix and Cutting Edge. The London Crystal Maze by Freixenet will be open to the public on March 15, 2016.
4.7
Score
Popularity
Activity
Freshness
Access Advisory Services