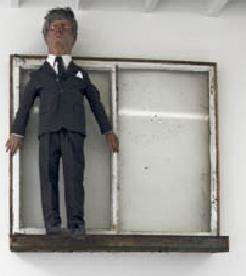 These LITTLEWHITEHEAD Works Get Inside Your Head

Josh Triantafilou — March 23, 2012 — Art & Design
References: littlewhitehead & beautifuldecay
Share on Facebook Share on Twitter Share on LinkedIn Share on Pinterest
British artistic duo LITTLEWHITEHEAD has a knack for depicting violence, tragedy and horror in a curious way that occasionally borders on humor. A man standing on the ledge of window, just about to jump off isn't most people's idea of funny -- because it isn't funny. However, when it is a merely a doll contemplating its own demise, it is comical. Perhaps this is because of the absurdity of such a scene; a doll is an inanimate object and therefore, cannot have any existentialist qualms.

LITTLEWHITEHEAD's works are not entirely humorous though. As discussed, the scenes they portray are quite macabre, but beyond this they are also enigmatic. They give one just enough that one understands what is happening in the scene, but not enough that one will understand how such a scene came to pass. In this way, LITTLEWHITEHEAD invites its audience to create their own narrative.