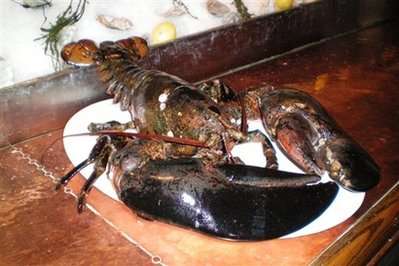 PETA gauged the creature’s age at about 140 years old. City Crab and Seafood had named the crustacean mascot George, as everyone including the chef was attached to him. Not many people have seen such a large lobster.

You might think that the customer was acting only in the best interest of the beast, but it was priced at $27 a pound, making George unaffordable to most diners. I suppose one of them got ticked off.

Rather than be harassed by PETA, and on the advice of its public relations manager, City Crab and Seafood decided to liberate the lobster. It will release it this weekend at Kennebunkport, Maine. That particular area forbids lobster trapping, so George can roam free to pick up girls and raise a new family.

“We applaud the folks at City Crab and Seafood for their compassionate decision to allow this noble old-timer to live out his days in freedom and peace,” said Ingrid E. Newkirk, president of PETA.

Another PETA spokesman, Michael McGraw, said that there have been at least a half-dozen other lobster liberations in restaurants around the country.
1.5
Score
Popularity
Activity
Freshness
Get the 2021 Trend Report FREE