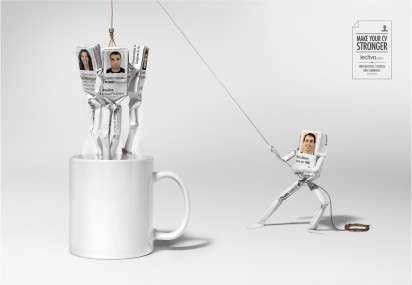 Meghan Young — March 27, 2012 — Marketing
References: ddb & ibelieveinadv
Share on Facebook Share on Twitter Share on LinkedIn Share on Pinterest
In this day and age when jobs are still far and few in between, the Lectiva.com campaign offers a lifeline that is hard to ignore. It encourages people to "make [their] CV stronger," as stated in the tag line, by using Lectiva's services and resources. That way, they can easily eliminate their competition.

The Lectiva.com campaign was created by DDB's Barcelona, Spain office. In the ad, people's resumes have been personified to represent either their strengths or weaknesses. One rises above the rest, effectively drowning, shredding, cutting and impaling the competition. These images help people envision themselves doing just that with their improved CVs.

Art directed by Aldo Ferretto, the Lectiva.com campaign was photographed by Raúl Ortega with production by Joan Gamper.