Pluto Not a Planet 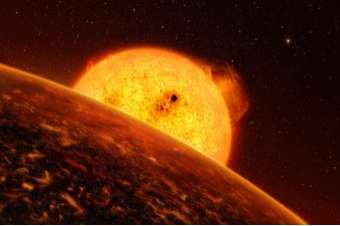 The Lava Planet Bears the Closest Resemblance to our World

Katherinev123 — September 17, 2009 — Science
References: eso.org & news.yahoo
Share on Facebook Share on Twitter Share on LinkedIn Share on Pinterest
Among the 300 planets that scientists have found outside of our solar system, most have been balls of gas or can’t be proven to be solid. Now, the first rocky planet, lightly coined the ‘Lava Planet,’ or 'Hell Planet,' has been discovered by a team of European astronomers.

Basically, the scientists have found a planet outside of our solar system that provides a firm place to stand, which is an exceptionally big deal because if a planet is to house any life, there must be a firm surface to rest on.

“It’s as close to something like the Earth that we’ve found so far.” says co-discoverer Artie Hatzes. “It’s just a little too close to the sun.”

Hence the nickname the ‘Lava Planet’ (its real name is Corot-7b, which is decidedly less fun). While this planet’s discovery is monumental, the surface temperature is more than 3,600 degrees Fahrenheit—way too hot for any life. But, it gives scientists confidence that more Earth-like planets will be found farther away, possibly with more life-favorable conditions.
1.7
Score
Popularity
Activity
Freshness
View Innovation Webinars