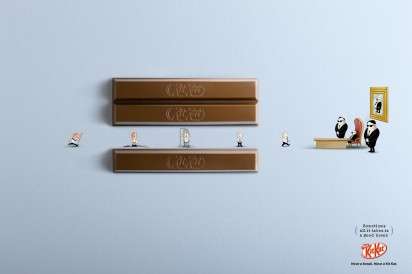 Meghan Young — February 5, 2013 — Marketing
References: jwt & ibelieveinadv
Share on Facebook Share on Twitter Share on LinkedIn Share on Pinterest
The Kit Kat ad campaign may revolve around the chocolate company's classic tag line, "Have a break, Have a Kit Kat," but it also elaborates on it. Instead of focusing solely on the break itself, the posters show the benefit of such a timeout. For instance, one of the print ads depicts an angry employee who seems resolved to show his boss who's really boss, takes a shower and becomes a lot more rational.