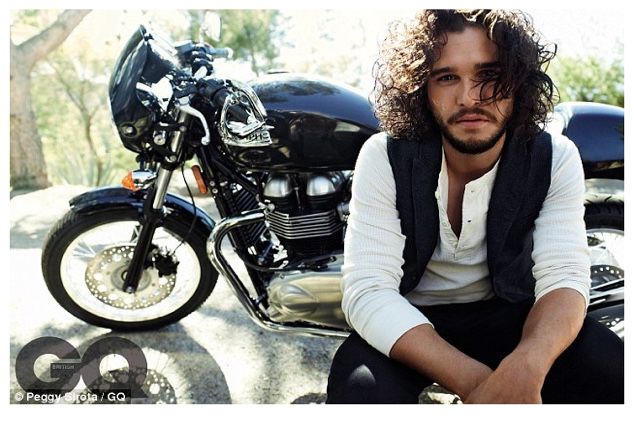 Meghan Young — December 20, 2014 — Fashion
References: gq-magazine & thefashionisto
Share on Facebook Share on Twitter Share on LinkedIn Share on Pinterest
The new season of the hit HBO television show 'Game of Thrones' will be starting very shortly, so it is only natural that its key stars such as Kit Harington start to show up in publications once again. Still embracing Kit Harington's long locks and scruffy beard, he's nevertheless the epitome of pretty boy in the photoshoot with his rosy cheeks and doe eyes.

Titled 'Game Boy,' Kit Harington appears in the January 2015 issue of GQ. Clad in dapper yet laidback looks from the likes of John Varvatos, Paul Smith, Burberry Prorsum and more, Kit Harington was shot by photographer Peggy Sirota. In the accompanying article, he comments on acting, “They’re all narcissists. Every single one, I promise you. To have that verve, to get up and want to be watched. It comes from a place--either you were denied that attention as a child, or you were given lots of it and want more. Which is where I land.”
4.6
Score
Popularity
Activity
Freshness
View Innovation Webinars