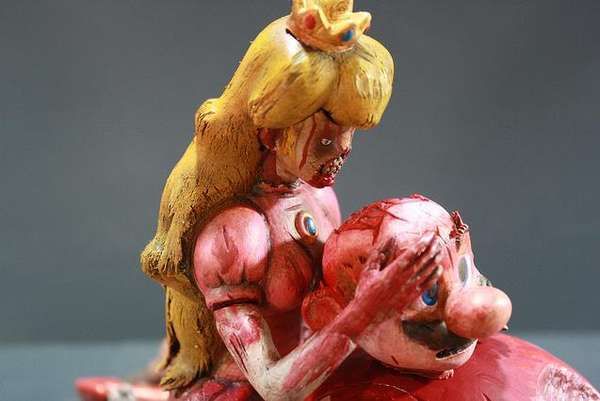 Jason Soy — February 6, 2012 — Tech
References: kodykoala & flickr
Share on Facebook Share on Twitter Share on LinkedIn Share on Pinterest
Kody Koala is renowned for his video game-inspired sculptures, and with his latest creation, he’s made Princess Peach from the Super Mario franchise turn into a grotesque zombie chowing down on Mario’s brains. The irony of the scenario is simply genius as the very person Mario’s constantly trying to save is the only threat he never managed to overcome.

In this particular sculpture, Kid Koala graphically depicts Princess Peach by removing her nose and lips to reveal rotting teeth, covering her in blood and oozing lacerations, and giving her beady eyes that would make grown men scream. That doesn’t compare to his treatment of Mario, however, as Koala has Princess Peach ripping off Mario’s upper-skull, revealing a gigantic pulsating brain. Did I forget to mention she’s eating his severed head atop a humorously over-sized mushroom?
6.8
Score
Popularity
Activity
Freshness
Access Advisory Services