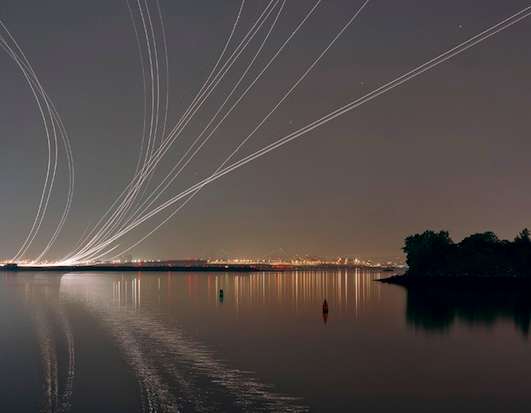 The Kevin Cooley Nachtfluge Images Feature the Paths of Aircrafts

Jordy E — April 5, 2013 — Art & Design
References: kevincooley.net & mymodernmet
Kevin Cooley's Nachtfluge images capture the trajectories of airplanes in the sky. The photography marked the pathways while at JFK, LAX, Newark and New Jersey's EWR, taking in the action with a large format camera in tow.

Cooley took note of individual planes as they passed by within the airports. Exposures that lasted for four to five minutes in length were able to tease out these strips in the sky, documenting where exactly each one took off.

Patience was essential to the Nachtfluge project as each second unveiled essential data. He nonetheless managed to make sense of the information he gathered in an artistic manner, giving way to these white lines that jut out amid homes and train tracks.
1.7
Score
Popularity
Activity
Freshness