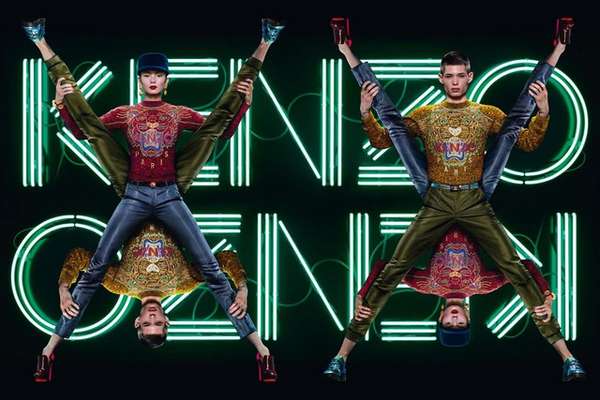 The Kenzo Fall 2012 Campaign is Fierce and Playful

Meghan Young — June 19, 2012 — Fashion
References: kenzo & fashiongonerogue
The Kenzo Fall 2012 ad campaign is electric. The imagery is exactly the type that will grab people's attention immediately, from the neon sign backdrop to the quirky and surreal stance the two models take. Strategically positioned in a perfect X formation, model Xiao Wen stands strongly alongside male model Simon Sabbah. It is important to note that these Xs happen to be the Kenzo logo.

Captured by French photographer Jean Paul Goude, the Kenzo Fall 2012 ad campaign is at once fierce and playful. Clad in matching sweaters that are embellished with a tiger illustration and form-fitting pants, the Chinese beauty and masculine newcomer make quite the statement. Eye-catching, to say the very least, it will have people intrigued about the Kenzo Fall 2012 collection in no time.
3.4
Score
Popularity
Activity
Freshness