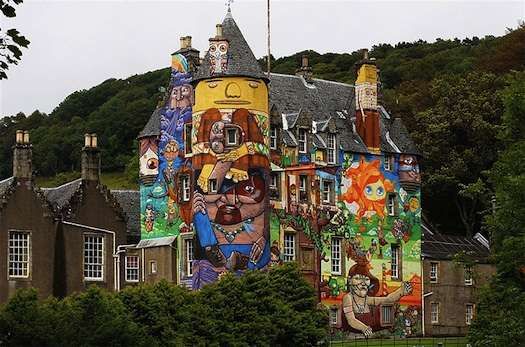 Meghan Young — September 5, 2011 — Art & Design
References: kelburnestate & psfk
Share on Facebook Share on Twitter Share on LinkedIn Share on Pinterest
If anyone needed any more proof that graffiti and other forms of street art have been accepted by the people as a true art form in itself, one needs only to look upon Kelburn Castle. The son and daughter of Patrick Boyle, the earl of Glasgow, have commissioned an expansive mural and are now seeking to make it a permanent part of the historical royal abode.

Created by a group of Brazilian street artists from Sao Paolo Nina and Nunca Os Gemeos, the mural on Kelburn Castle features bright, psychedelic scenes interwoven with surreal characters. Although it doesn't seem very regal, the fact that aristocratic families, who are often considered quite traditional and even stuffy, are embracing this contemporary art form really shows how far graffiti has come in the public's eye.
4.7
Score
Popularity
Activity
Freshness
Get Trend Hunter Dashboard

Graffiti Exhibition Narratives
Mister Cartoon: Art in the Streets Looks Back on a Long Journey
play_circle_filled