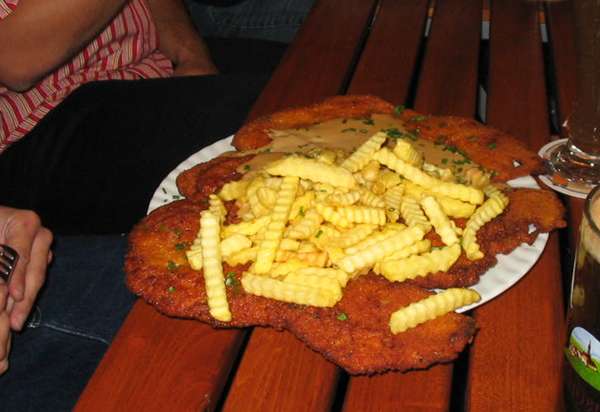 Bianca — October 30, 2007 — Unique
References: restaurant-waldgeist & supersizedmeals
Share on Facebook Share on Twitter Share on LinkedIn Share on Pinterest
The super-size trend seems to have evolved to jumbo sized. It seems a restaurant in Germany has their own version of the Heart Attack Grill. The Waldgeist restaurant in Hofheim serves up the biggest portion of Schnitzel I have ever seen!

To wash it down, order a titanic German beer. Will a 2L jug quench your thirst?

The photos show the world's largest schnitzel which is so enormous, the staff serves up a side of aluminum foil to pack up leftovers... and I should hope there would be a lot. A single one of these whoppers looks like it could feed an entire family. Also in the gallery is the restaurant's greasy mammoth of a burger. They also have a colossal bratwurst among other edible atrocities.