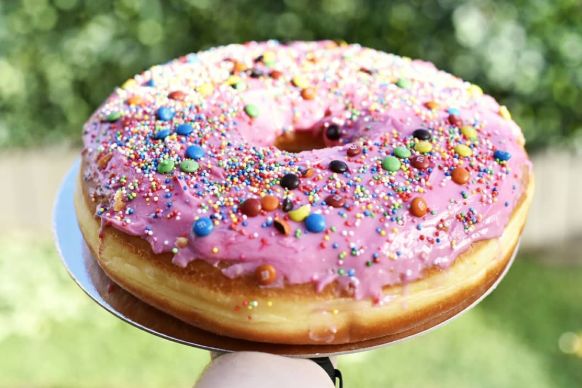 Katherine Pendrill — June 26, 2019 — Lifestyle
References: delish
Share on Facebook Share on Twitter Share on LinkedIn Share on Pinterest
For those moments when a whole box of donuts just isn't enough, Costco Australia has created a Handmade Jumbo Iced Donut. Weighing nearly two-pounds, this oversized donut is a lot closer to a cake than the pastries you'll find at your local donut shop.

Costco's new Handmade Jumbo Iced Donut looks similar to Dunkin’ Strawberry Frosted donut. However, the main difference between the two is that the Costco version is enormous, at nearly 900 grams. That's two-pounds worth of pastry, strawberry frosting, rainbow sprinkles, and M&M’s. In other words, this is one dessert that you'll definitely be sharing.

Currently, the donut appears to be exclusive to Costco locations in Australia. However, Costco offers a number of other supersized desserts for those in the US looking to feed a crowd.