Talent Waiting to Bust Out 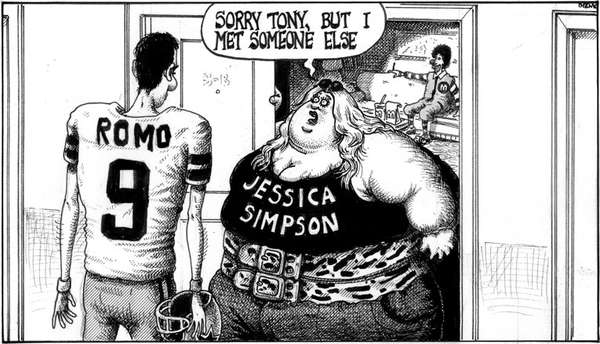 Marissa Brassfield — January 29, 2009 — Lifestyle
References: dailymail & nypost
Jessica Simpson's appearance at the KIIS FM Chili Cookoff was meant to be just another appearance for the pop/country crooner. Instead, it's sparked an insidious weight war between A-listers and the media, with Simpson stuck in the middle.

Jessica Simpson's sister, Ashlee, stuck up for her sister, as did Miley Cyrus, Justin Gaston, Kim Kardashian, and Simpson's former personal trainer. They're pitted against headlines from major newspapers and media outlets like "Jessica Simpson's a bigger star than ever as she shows off her new curvier figure," "Kim Kardashian defends chubby Jessica, " "Give Celebs a Fat Chance," and "Jessica Simpson is Getting Fat!"

To top it all off, the New York Post ran a cartoon on January 28 that depicted an obese Jessica Simpson telling Tony Romo that she'd left him for McDonald's. While no one can argue that Simpson is the tiny, svelte star she was in months past, she's not big by any means. Is such gratuitous exaggeration comedy, or just plain cruel?
6.6
Score
Popularity
Activity
Freshness