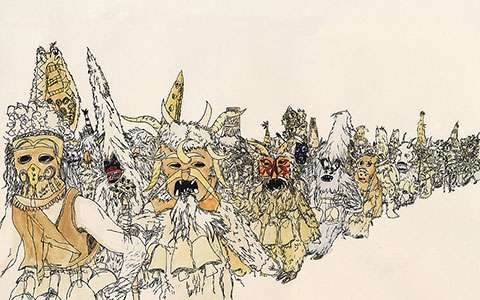 Andrew Robertson — April 22, 2012 — Art & Design
References: jworby & lostateminor
Share on Facebook Share on Twitter Share on LinkedIn Share on Pinterest
These illustrations by Jess Worby, comical though they may be, reflect upon habits and tendencies that come to define people. The hand-drawn sketches exude a comic book feel, relating to both their visual potency and the dynamic interaction. The characters in these illustrations don’t exist as separate, self-contained elements but rather are part of a larger, all-encompassing significance.

Full of expression and angst, the interactions captured in these drawings are at once bizarre and recognizable. One illustration depicts a body of elderly men all reaching for a floating dollar bill. The only color present within this portrait is the bill and the men’s ties, illustrating the collective attention and focus towards vanity. Jess Worby brings viewers to a familiar scenario by playing off social anxieties.