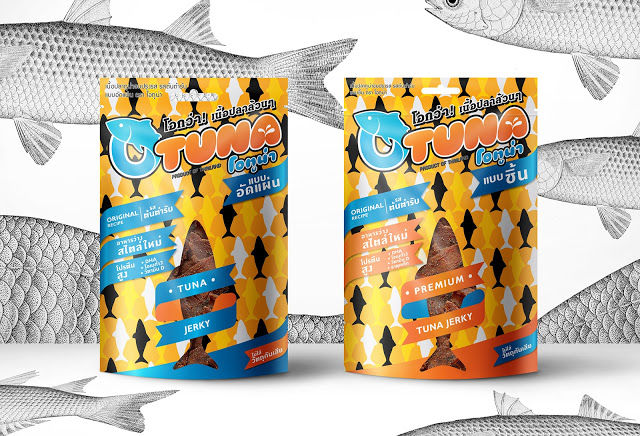 Laura McQuarrie — September 11, 2014 — Lifestyle
References: facebook & packagingoftheworld
Since red meat gets a bad rap in terms of health, it's no surprise that there are better options out there for a jerky meat snack. One alternative thing to snack on is Otuna's line of tuna jerky, which is made from 100% tuna fish rather than beef. The products offerings from Otuna include Tuna Jerky and Premium Tuna Jerky, which is differentiated by the image of a colored ribbon on the packaging.

The savory snack is packaged in a similar way to traditional beef jerky, with a small cutout that reveals the meat snack inside. On the outside, the protective packaging pouch designed by Thailand's Kingkong Bangkok Co. takes inspiration from fish scales to create a colorful pattern made up of small fish silhouettes.
4.1
Score
Popularity
Activity
Freshness