Lightweight Windproof Down Jackets
Next
Set of
Related
Ideas 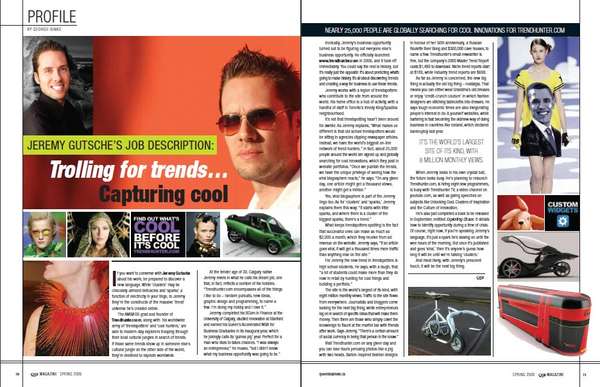 Marissa Brassfield — August 14, 2009 — About
References: business.queensu
Share on Facebook Share on Twitter Share on LinkedIn Share on Pinterest
Jeremy Gutsche was profiled in the alumni magazine for Queen’s School of Business, the school where he studied for his MBA.  The profile does a great job of describing how Trend Hunter works and what motivates Jeremy on a daily basis.

If you want to converse with Jeremy Gutsche about his work, be prepared to discover a new language.While ‘clusters’ may be chocolaty-almond delicacies and ‘sparks’ a function of electricity in your lingo, to Jeremy they’re the constructs of the massive ‘trend’ universe he’s created online.

The AMBA’05 grad and founder of Trendhunter.com, along with his worldwide army of ‘trendspotters’ and ‘cool hunters,’ are akin to modern-day explorers trooping through their local cultural jungles in search of trends. If those same trends show up in someone else’s cultural jungle on the other side of the world, they’re destined to explode worldwide.

At the tender age of 30, Calgary native Jeremy revels in what he calls his dream job, one that, in fact, reflects a number of his hobbies. “TrendHunter.com encompasses all of the things I like to do – random pursuits, new ideas, graphic design and programming, to name a few. I’m doing my hobby and I love it.”

Jeremy completed his BCom in Finance at the University of Calgary, studied innovation at Stanford and earned his Queen’s Accelerated MBA for Business Graduates in its inaugural year, which he jokingly calls its ‘guinea pig’ year. Perfect for a man who likes to takes chances. “I was always an entrepreneur,” he muses, “but I didn’t know what my business opportunity was going to be.”

Ironically, Jeremy’s business opportunity turned out to be figuring out everyone else’s business opportunity. He officially launched TrendHunter.com in 2006, and it took off immediately. You could say the rest is history, but it’s really just the opposite: It’s about predicting what’s going to make history. It’s all about discovering trends and creating a way for business to use those trends. Jeremy works with a legion of trendspotters who contribute to the site from around the world. His home office is a hub of activity, with a handful of staff in Toronto’s trendy King/Spadina neighbourhood.

It’s not that trendspotting hasn’t been around for awhile. As Jeremy explains, “What makes us different is that old school trendspotters would be sitting in agencies clipping newspaper articles. Instead, we have the world’s biggest on-line network of trend hunters.” In fact, about 25,000 people around the world are signed up and globally searching for cool innovations, which they post in website portfolios. “Once we publish the trends, we have the unique privilege of seeing how the viral blogosphere reacts,” he says. “On any given day, one article might get a thousand views, another might get a million.”

Yes, viral blogosphere is part of the Jeremy lingo too. As for ‘clusters’ and ‘sparks,’ Jeremy explains them this way: “It starts with little sparks, and where there is a cluster of the biggest sparks, there’s a trend.”

What keeps trendspotters spotting is the fact that successful ones can make as much as $2,000 a month, which they receive from ad revenue on the website. Jeremy says, “If an article goes viral, it will get a thousand times more traffic than anything else on the site.”

For Jeremy the new trend in trendspotters is high school students. He says, with a laugh, that “a lot of students could make more than they do now in retail by hunting for cool things and building a portfolio.”

The site is the world’s largest of its kind, with eight million monthly views. Traffic to the site flows from everywhere. Journalists and bloggers come looking for the next big thing, while entrepreneurs log on in search of specific ideas that will make them money. Then there are those who simply covet the knowledge to flaunt at the martini bar with friends after work. Says Jeremy, “There’s a certain amount of social currency in being that person in the know.”

Visit TrendHunter.com on any given day and you can lose hours perusing photos like a pig with two heads, Barbie-inspired fashion designs in honour of her 50th anniversary, a Russian Roulette Beer Bong and $300,000 cave houses, to name a few. TrendHunter’s email newsletter is free, but the company’s 2009 Master Trend Report costs $1,499 to download. Niche trend reports start at $189, while industry trend reports are $699.

As far as Jeremy is concerned, the new big thing is actually the old big thing – nostalgia. That means you can either wear Grandma’s old dresses or enjoy ‘credit-crunch couture’ in which fashion designers are stitching tablecloths into dresses. He says tough economic times are also invigorating people’s interest in do-it-yourself websites, while bartering is fast becoming the old/new way of doing business in countries like Iceland, which declared bankruptcy last year.

When Jeremy looks in his own crystal ball, the future looks busy. He’s planning to relaunch Trendhunter.com, is hiring eight new programmers, is busy with Trendhunter TV, a video channel on youtube.com, as well as giving speeches on subjects like Unlocking Cool, Clusters of Inspiration and the Culture of Innovation.

He’s also just completed a book to be released in September, entitled Exploiting Chaos. It details how to identify opportunity during a time of crisis.  Of course, right now, if you’re speaking Jeremy’s language, it’s just a spark he’s slaving on until the wee hours of the morning.

But once it’s published and goes ‘viral,’ then it’s anyone’s guess how long it will be until we’re talking ‘clusters.’ And most likely, with Jeremy’s prescient touch, it will be the next big thing.
3.8
Score
Popularity
Activity
Freshness
Attend Future Festival