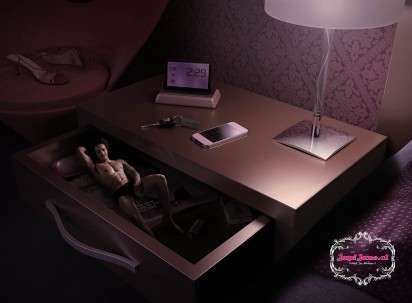 The Japi Jane Campaign Turns the Taboo into Pure Fantasy

Meghan Young — November 26, 2011 — Naughty
References: japijane.cl & ibelieveinadv
Share on Facebook Share on Twitter Share on LinkedIn Share on Pinterest
Sex toys may still be considered taboo by some, but sexy men definitely aren't; the Japi Jane ad campaign bridges the two for fun results. Instead of awkward shots of actual vibrators and other adult toys, this Japi Jane ad campaign feeds on a woman's imagination and transforms those products into what they are really wishing for: a pleasuring hunk with an 8-pack.

Conceived and executed by TBWA Frederick, an ad agency based in Santiago, Chile, the Japi Jane ad campaign is simple, clever and lighthearted. From the bedside table to the purse and even the bathroom cabinet, it shows all the secret (and not-so-secret) places that a woman hides her "massager." The Japi Jane ad campaign will make women giggle as they walk up the aisle to purchase their own Japi Jane product.
3.9
Score
Popularity
Activity
Freshness
Get the 2023 Trend Report FREE