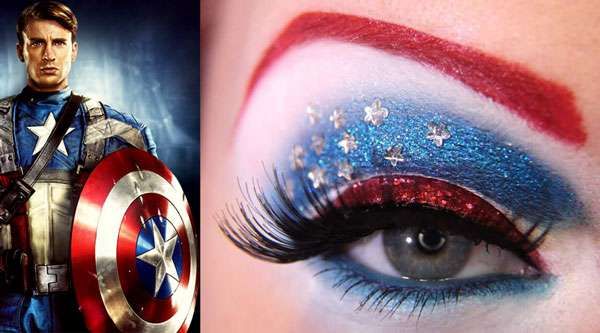 Jason Soy — April 28, 2012 — Fashion
References: facebook & blog.thaeger
Share on Facebook Share on Twitter Share on LinkedIn Share on Pinterest
Those who think comic books are exclusively for men obviously haven’t laid their eyes on these images of Jangsara makeup. Inspired by the upcoming The Avengers movie, Jangsara has crafted provocative looks based on Captain America, Iron Man, Black Widow, Thor, Loki, Nick Fury, Hawkeye and the Hulk. Who knew the bizarre spandex outfits of those superheroes would translate so well into stylized eye shadow?

If the spectacular colors and designs weren’t enough to make you think of Jangsara as a makeup savant, she even glues little jewels in the shapes of stars and bubbles to further accentuate her model’s eyes whilst paying greater homage to Marvel Comics creations. If getting cool eye makeup is a side effect of reading too many graphic novels, I suggest all women do it.