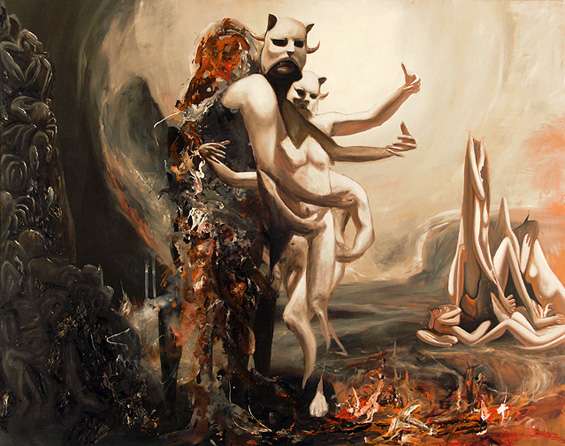 Jacques de Beaufort is a 36-year-old Delaware native who began his art career after graduating from the University of Virginia in 1997. His work is heavily influenced by psychedelic surrealism. His paintings feature grisly images, including two young children standing next to a blood-red body of water and a jagged mountain that looks like a gruesome version of Mount Rushmore with wolves and a skinless man stepping in for the Lincoln, Washington, Jefferson and Roosevelt.

Jacques de Beaufort sees his work as creating a connection between two disparate realms of human consciousness. "Psychopompos are spirits from the non-visible world that have the ability to cross between the barrier that separates us from the other," he said. "As a mediator between the conscious and unconscious realms, the psychopomp is able to restore psychic order and bring forth a deeper level of consciousness and clarity."