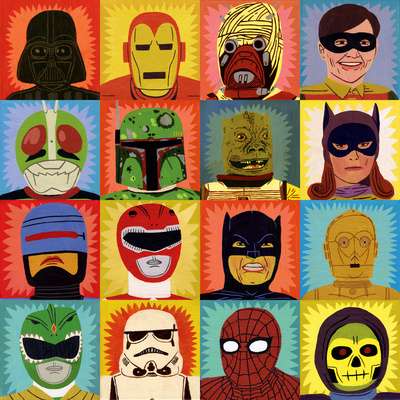 Jason Soy — November 20, 2011 — Pop Culture
References: society6 & lacarpa.tumblr
Share on Facebook Share on Twitter Share on LinkedIn Share on Pinterest
If the Brady Bunch featured the infamous pop culture characters in these Jack Teagle illustrations, it would have no doubt had glorious ratings surpassing even that of the original show. But since it didn't, I guess these fun and vibrant paintings will have to suffice.

The cover image in this gallery of Jack Teagle works is entitled 'Heroes and Villains' and it features the familiar faces of Darth Vader, Iron Man, RoboCop, Batman, and the Green and Red Power Rangers. All the iconic crime fighters and evil doers are drawn with a retro vibe to them, making them ultra chic to hang up on walls as decor.

Superhero Charity Contests
Join the MASScanvas Challenge 5: Stane Lee for a Good Cause