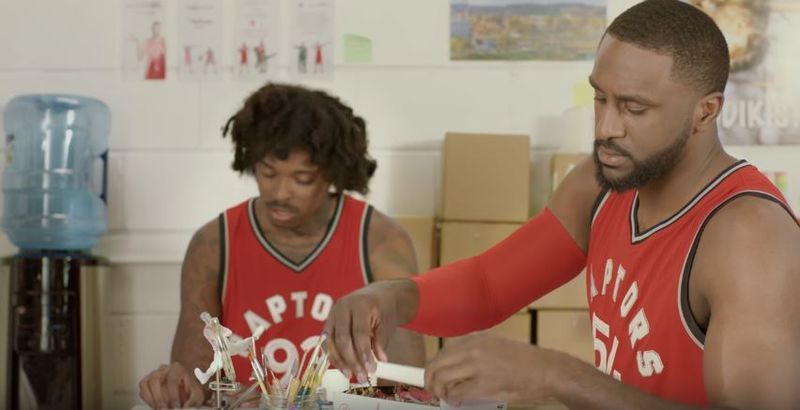 Joey Haar — April 18, 2017 — Lifestyle
References: ittybittyballers
Share on Facebook Share on Twitter Share on LinkedIn Share on Pinterest
After the success of the initial run of Itty Bitty Ballers figures, which featured the Toronto Raptors' star center Jonas Valanciunas in a variety of gleefully absurd poses, GoDaddy has extended the Itty Bitty Ballers to include two more Raptors: Patrick Patterson and Lucas 'Bebe' Nogueira. As with before, a new commercial is airing to announce the launch of the new figures (and to give Raptors fans an update on how JV's business has been faring since the previous commercial earlier this season).

For those not familiar with the GoDaddy campaign: as a demonstration of the domain hosting company's friendliness for small businesses, it launched a campaign in which the Raptors' starting big man created a series of little men — i.e. figurines of himself — and sold them online. Though the business was fictional, GoDaddy did indeed use its new Website Builder to create a site for selling the advertised Itty Bitty Ballers figures, and they sold out in just 10 days.

In the new campaign commercial, JV talks about how his booming business enabled him to hire two employees: Bebe and 2Pat. But the two Raptors glue men are tired of crafting JV alone, so they brainstorm their own figures. As with the silly poses from JV's line, the new figurines feature things like Bebe riding a unicycle and 2Pat reimagined as a centaur. These are all available on the Itty Bitty Ballers site, though many are already sold out.
3.6
Score
Popularity
Activity
Freshness
View Innovation Webinars

Cultural Basketball Rebranding
The 'We the North' Campaign Focuses on Toronto