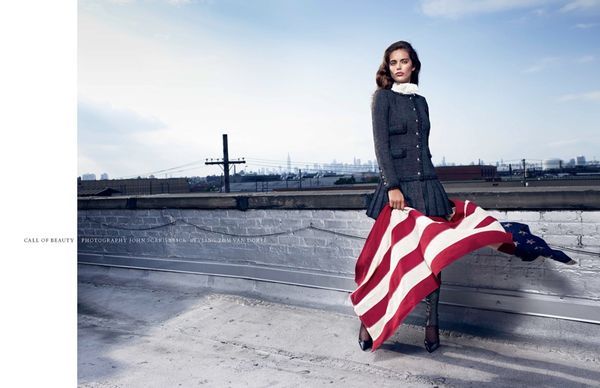 Meghan Young — November 25, 2013 — Fashion
References: intermissionmagazine & fashiongonerogue
Share on Facebook Share on Twitter Share on LinkedIn Share on Pinterest
The americana aesthetic can be described as free-spirited, vintage and even feminine at times, but ladylike is not usually used in the same sentence; that is, until the Intermission Magazine Issue 8 editorial was shot. It adds a touch of elegance to looks that are synonymous with the heritage of the United States.

From the appearance of the American flag to football shirts and a predominant colorway of red, white and blue, the theme of the Intermission Magazine Issue 8 editorial is undeniable. Shot by photographer John Scarisbrick for the fall-winter 2013 issue, the photoshoot stars model Emily DiDonato. The American beauty was was outfitted by stylist Tom van Dorpe, who pulled pieces from the likes of Tim Coppens, Dior and Miu Miu. The looks were perfected with lush curls and full makeup.
4.6
Score
Popularity
Activity
Freshness
Access Advisory Services