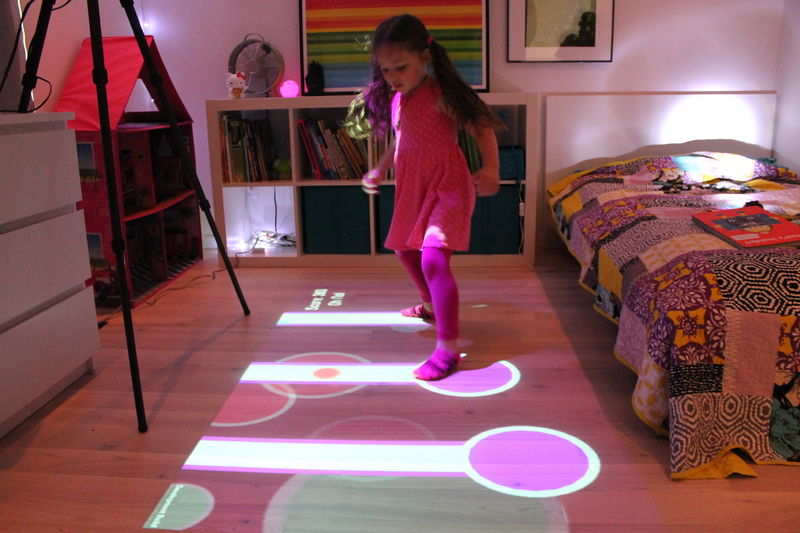 Rahul Kalvapalle — March 19, 2015 — Tech
References: indiegogo & lumoplay
The Lumo Play system uses an interactive projector to enable kids to play various games on floor projections. Classic games like air hockey, soccer and hungry, hungry hippos can be projected on a floor, and children can interact with game elements by moving around, kicking, waving their arms, etc. The Lumo projector can also detect real physical toys and incorporate them into the game, so the possibilities are endless.

While some parents may be concerned that high-tech toys may promote a sedentary lifestyle, this concern doesn't apply to the Lumo Play system because it actually encourages children to move. These games encourage children to run, jump and move around, which is what kids should be doing anyway. Moreover, Lumo also fosters a spirit of invention in children by allowing them to create their own games. Children can use a simple online interface to create games that use their own artwork. So rather than sitting in front of a computer or gaming console to play a game someone else created, they can now run around their rooms playing fun interactive games that they can claim to have created themselves.

If you're interested in grabbing one of these for your kids, keep an eye out for Lumo's Indiegogo campaign which is set to launch March 23. Only a limited number of units will be available depending on cost, so be primed to act fast! Lumo is also currently running a contest on their website to promote the upcoming Indiegogo campaign.

The Lumo Play is a great example of how technology can be used to solve perceived problems of technology, such as its tendency to make people sedate and passive. This system encourages creativity and fosters active play, making it a fun and healthy option for kids.
4.7
Score
Popularity
Activity
Freshness

Sci-Fi Battlement Games
XCOM: the Board Game is Played Alongside an App