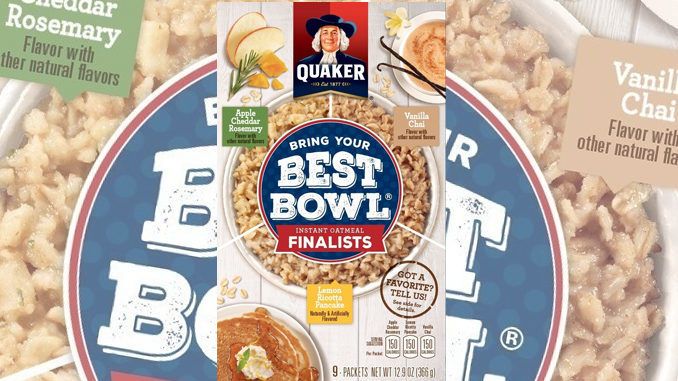 Katherine Pendrill — October 26, 2016 — Marketing
References: bringyourbestbowl & chewboom
Share on Facebook Share on Twitter Share on LinkedIn Share on Pinterest
Last December, Quaker launched its Bring Your Best Bowl Contest to give fans a chance to pick the next instant oatmeal flavor. Now the top three flavors have been revealed and fans will be given an opportunity to vote for the flavor they would like to see on store shelves.

Out of more than half a million submissions, Quaker has chosen three new oatmeal flavors for fans to choose from: Vanilla Chai, Lemon Ricotta Pancake and Apple Cheddar Rosemary. In order to vote for the next instant oatmeal flavor, fans can visit the Bring Your Best Bowl website, or use hashtags such as #VoteVanillaChai on Twitter. Voting will be open up until November 19th and the winner will be announced in February of 2017. The creator of the winning flavor will not only get to see their creation on store shelves, but they will also receive a $250,000 prize.

The contest demonstrates how brands can collaborate with consumers by giving them an opportunity to have a say in what kinds of products will be produced.
1.2
Score
Popularity
Activity
Freshness
View Innovation Webinars