Constantly Seek to Be Unique

Fire People for Not Failing
Next
Set of
Related
Ideas 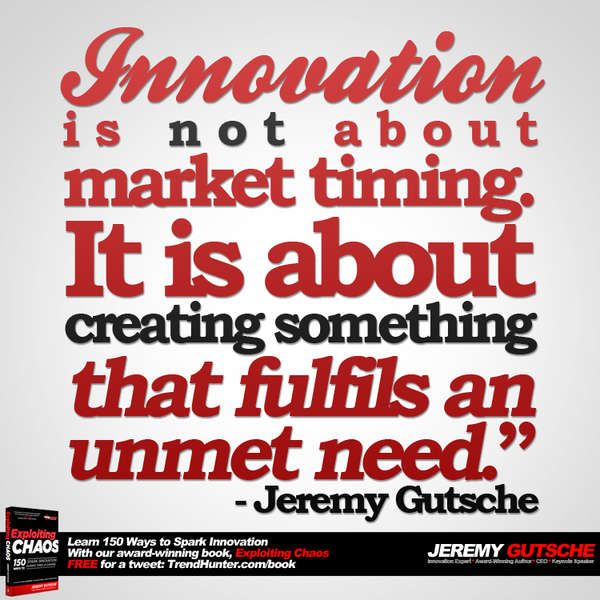 Jaime Neely — February 5, 2013 — Business
References: jeremygutsche
Share on Facebook Share on Twitter Share on LinkedIn Share on Pinterest
Innovation strategy speaker Jeremy Gutsche offers his clients and keynote audiences a unique and insightful interpretation of what it means to innovate today. According to Gutsche, "innovation is not about market timing. It is about creating something that fulfills an unmet need." This philosophy of Jeremy's centers around the idea that businesses can thrive in times of loss and crisis.

Jeremy's award-winning book 'Exploiting Chaos' -- which you can read for FREE here -- takes its readers back to the period of the Great Depression to illustrate his point. He shares the story of Fortune Magazine and how it was able to succeed while other ventures failed because it met a particular need of consumers during a hard time.

"During the Great Depression, unemployment soared to 25%, 15,000 banks failed, and Wall Street was no longer a place of glamour. Four dreadful months into this depression, Henry R. Luce launched a pricey magazine titled Fortune. At $1 an issue, the cover price surpassed the cost of a functional wool sweater. Seemingly bad timing.

Eight years later, Fortune has grown its subscriber base to 460,000 people. By 1937, the magazine reported an annual profit of $500,000. Scaled for inflation, that amounts to more than 7 million modern-day dollars. That's a lot of wool sweaters."

Fortune at the time, was much more than a magazine -- it offered consumers something unique and relevant at a time when other brands were not providing.