Skinny Jeans Welcome the Thin but Annoy Others

Marketing to Muslims
Next
Set of
Related
Ideas 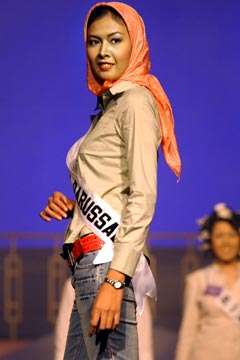 The Indonesia Ban on Hot Pants and Stovepipes

Katherine Vong — October 29, 2009 — Social Good
References: reuters & stylelist
For the fashionista, having any sort of clothing option prohibited is incomprehensible. So for the fashionista living in Indonesia, it’s probably time to move. The Indonesia ban in Aceh province forbids women to wear tight pants.

According to Stylelist.com, the Indonesia ban on tight pants is the latest in a string of dress code clampdowns in Muslim countries. The new laws in Indonesia will require that women wear Muslim dress or risk having their inappropriate pants destroyed. Pants themselves, however, are allowed as long as the woman wears a long skirt over it to cover her ankles and her top isn’t tucked into them. In terms of perfect Muslim dress, women are not allowed to reveal their body shape at all.
4.3
Score
Popularity
Activity
Freshness

Islamic Virtual Worlds
Muxlim.com Is Social Networking for Muslims in the Western World