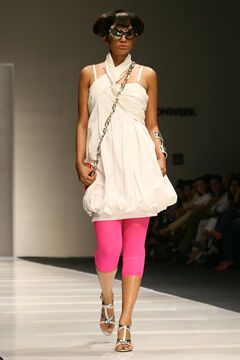 Each season, the women's most fashioable look to Paris, Milan and New York, and in recent years, expanding to include Asian cities like Hong Kong and Tokyo, but India still remains heavily out of that mix.

With the dawn of Vogue India, however, that could change. Granted they had a rocky start with an incredibly controversial magazine cover, but India Fashion Week proved it was a nation rich in sartorial savvy.

The image gallery includes fashion from the spring 2009 Lecoanet Hemant collection. Even when on not showing off looks that could be best described as 'galactic glam,' the collection was rich in color, and highly feminine. It had everything from Grecian-gown rouching to space goggles to beautifully light saris that would look equally great shopping on Sunset, or lounging poolside in Saint Tropez as they would in chic urban hubs of India.
2.9
Score
Popularity
Activity
Freshness
Get Trend Hunter Dashboard