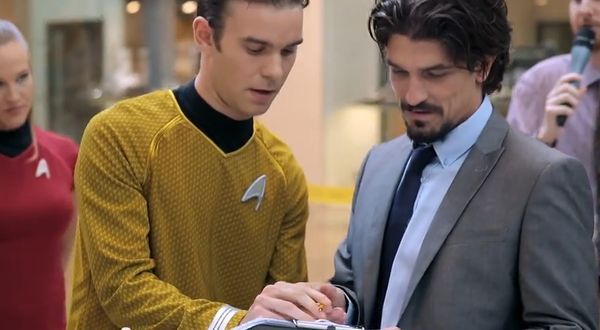 The Audience is Dumbfounded When Twins Disappear Through Teleportator

Akihiko Tse — September 18, 2013 — Unique
References: huffingtonpost & designtaxi
Share on Facebook Share on Twitter Share on LinkedIn Share on Pinterest
There are some moments when having a twin can truly come in handy -- like if you want to pull of classic prank of being in two places at once. To commemorate the release of the new Star Trek movie released this year, blinkbox and famed illusionist Scott Penrose awed customers at a shopping wall into believing they were witnessing the world's first teleportation device.

As "volunteers" were chosen to be teleported, they were first asked to sign a waiver "just in case anything goes wrong." As they step into the teleportation device, a low humming sound emanates as they are engulfed by a bright white light and disappear. Moments later, the same volunteer appears in a separate location, leaving audience members completely dumbfounded. Little does the audience, however, that the volunteers in fact have identical twins dressed and groomed exactly like those teleported -- a classical prank to pull on anyone.
3.2
Score
Popularity
Activity
Freshness
Jeremy Gutsche Keynote Speaker