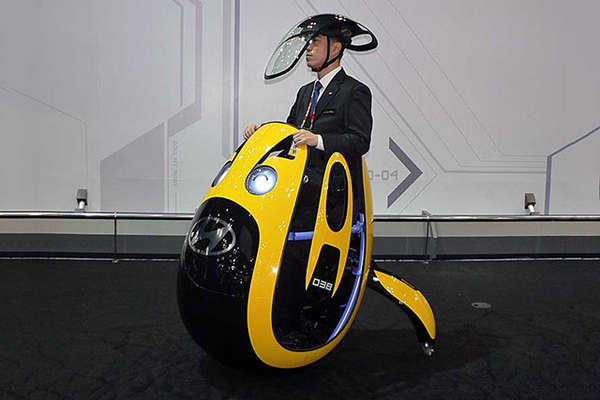 The Hyundai E4U Concept is Something Out of a Pixar Film

Meghan Young — April 2, 2013 — Autos
References: hyundai & theverge
The Hyundai E4U looks like something out of a Pixar film. Fun and funny, it takes the form of an egg. In fact, the Hyundai E4U makes the rider look like a newly hatched chick since the accompanying helmet is rounded as though it popped off from the top of the 'egg.' Nevertheless, as far as Personal Mobility Vehicles (PMVs) go, the Hyundai E4U is a sleek and playful alternative to typically dull designs.

It might look like a combination of something found in the films 'Transformers' and 'Tron,' but the Hyundai E4U functions very differently. It moves by using a semisphere that constantly spins horizontally. Similar to how a helicopter steers, it tilts to move forward while two stabilizing wheels at the back keep it straight.
6.6
Score
Popularity
Activity
Freshness