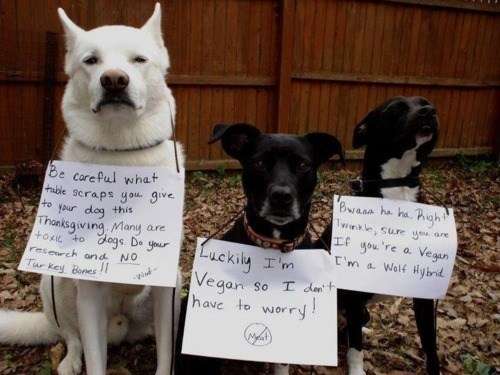 The Holiday Pup PSA is Adorable

Felicia Moursalien — November 23, 2011 — Social Good
References: arkanimals & thedailywh.at
Share on Facebook Share on Twitter Share on LinkedIn Share on Pinterest
Imagined doggie dialogue butters me up every time, and in this adorable holiday pup PSA, I now know not to serve the little guys some of that butter-ball turkey either. The ad features three dogs of varying backgrounds with signs on their necks, as if they were all bibbed-up and ready to chow down. The big dog on the scene, which is the dashing white canine, delivers the brunt of the message telling people not to feed dogs scraps because some of them may be toxic for them, like turkey.

The other two pups serve as comic relief, but that’s all you need when trying to get a simple message to go viral. The middle dog thinks he’s above it all by saying he’s a vegan (probably mimicking his owner in self righteousness), and the other dog puts him back in his place. The message is simple and efficient and most of all cute, making this holiday pup PSA extremely effective.
1.8
Score
Popularity
Activity
Freshness
Get the 2021 Trend Report FREE