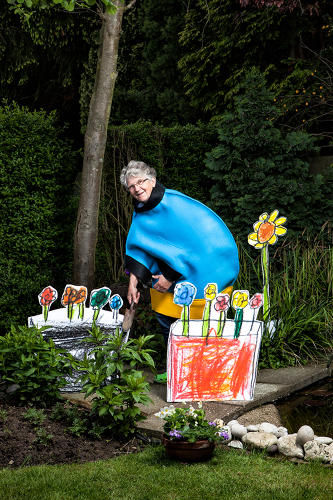 Meghan Young — November 12, 2013 — Life-Stages
References: yonilefevre & fastcodesign
Share on Facebook Share on Twitter Share on LinkedIn Share on Pinterest
Grey Power by Yoni Lefevre, a photographer and student at the Design Academy Eindhoven, is a series revolving around grandparents and their grandchildren's active imagination. It essentially brings to life children's adorable and fantastical drawings of their grandparents to the delight of all involved. In doing so, the series benefits both parties in different ways.

Created in order to challenge the depiction of seniors as dependent and past their prime, Grey Power by Yoni Lefevre not only shows them as very active, but also happy and healthy. Of course, in a very surreal way. Basically, Lefevre has interpreted the drawings with fun ones of her own, as well as hilarious wardrobe decisions, to accurately convey what the kids have put on paper with a handful of crayons.
4.5
Score
Popularity
Activity
Freshness
View Innovation Webinars