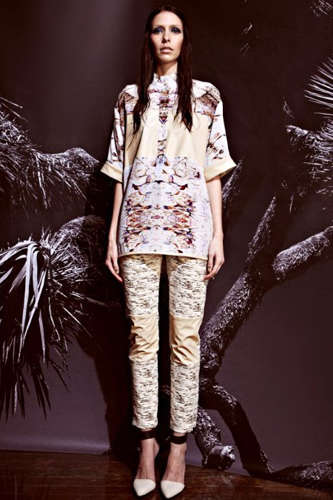 Meghan Young — February 21, 2013 — Fashion
References: gretchenjonesnyc & refinery29
Share on Facebook Share on Twitter Share on LinkedIn Share on Pinterest
The Gretchen Jones Spring 2013 catalog and collection turns strays from the Brooklyn-based designer's usual pension for rustic Americana designs. Instead, it travels slightly more east for a touch of the exotic. Although the lookbook was shot in studio against a jungle-inspired backdrop and not a jungle itself, the outfits would inspire some women to take stroll through nighttime foliage.

Of course, as Refinery 29 points out, New York City is often considered a concrete jungle that never sleeps, hence the Gretchen Jones Spring 2013 collection is fit for urbanites looking to embrace they wilder sides. Full of vibrant prints, draping skirts and loose tops, the silhouettes are relaxed even if the looks are very busy. They are perfect for the upcoming season.
6.1
Score
Popularity
Activity
Freshness
Jeremy Gutsche Keynote Speaker