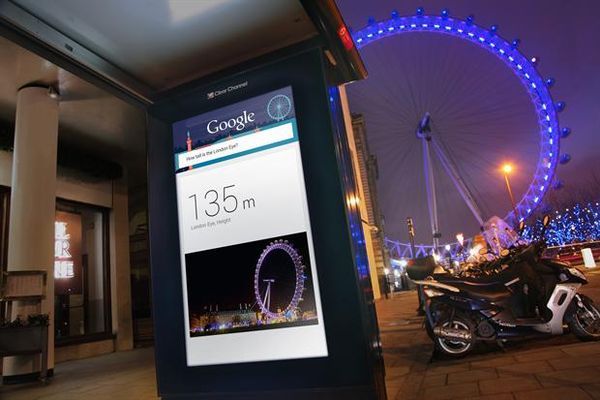 Tiffany — November 8, 2013 — Tech
References: inferse & standard
Share on Facebook Share on Twitter Share on LinkedIn Share on Pinterest
The massive search engine powerhouse has partnered up with advertising agency R/GA London to come up with a pilot scheme that helps to make London a better place for tourists and residents called 'Google Outside.’ Putting together giant display screens providing residents and tourists alike with useful information such as attractions, restaurants, businesses, shops, location, weather etc.

These giant display screens can be found in 160 located across London, in 100 bus shelters and 60 underground tube stations. The program used to run Google Outside is identical with Google Now, which provides valuable information to its users. For example, if the weather takes a turn for the worse, the search engine will guide you to nearby coffee shops, nearby shopping malls or cinemas.

A Google spokeswoman told the London Standard that they are “currently testing a new way of helping users get the most out of London, as we want people to enjoy Google wherever they are.” The pilot scheme will carry on into early December.
5.6
Score
Popularity
Activity
Freshness
View Innovation Webinars