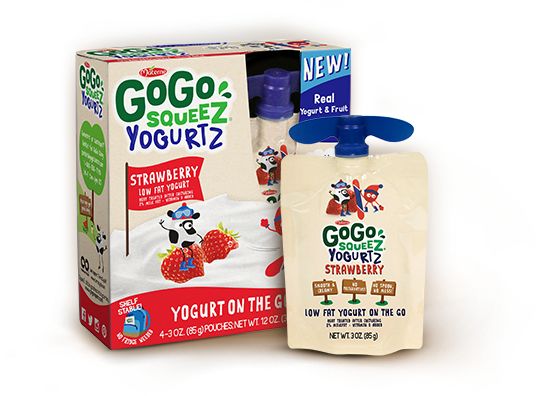 Katherine Pendrill — June 11, 2016 — Life-Stages
References: gogosqueez & trndmonitor
GoGo squeeZ is selling a line of low fat yogurts in handy squeezable pouches. While yogurt is a healthy snack option for kids, it is often packaged in plastic cups that are messy to eat from and cannot be resealed. GoGo squeeZ offers parents a more convenient snack option with its resealable yogurt pouches.

The GoGo squeeZ YogurtZ consists of low fat yogurt in three tasty fruit flavors. The yogurts are a great source of calcium, protein and vitamin D, making them a healthy option for growing kids. Additionally, the yogurts are free from gluten, artificial growth hormones and high fructose corn syrup.

Not only are the yogurts healthy, but they are also packaged in single-serve squeezable packets that prevent kids from making a mess during snack time. The pouches can even be resealed and saved for later, which is ideal for fussy eaters.
3.1
Score
Popularity
Activity
Freshness