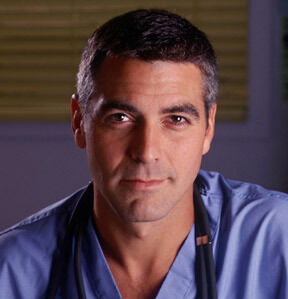 "Rather than pitting artist against artist, maybe we could find a way to get what both unions are looking for," Clooney said. "Because the one thing you can be sure of is that stories about Jack Nicholson versus Tom Hanks only strengthen the negotiating power of the AMPTP."

Nicholson is on the Screen Actors Guild (SAG) side along with Ben Stiller, while the American Federation of Television and Radio Artists (AFTRA) side has stars like Hanks and Alec Baldwin, Kevin Spacey and Morgan Fairchild.

"Millions more Americans are likely to turn to iPhones and Wii games for entertainment, hastening what some regard as Hollywood's inevitable obsolescence," the Times Online predicts if the TV show is in fact canceled.

By the way, this isn't the first step Clooney has taken to resolving issues. The actor, along with fellow Ocean's 11 cast members, Matt Damon and Brad Pitt, has launched an awareness and aid campaign for Myanmar.

Their group, Not On Our Watch, headed the campaign with the slogan, "Burma's neighbors have the power to help victims who remain desperately in need."

After news like this, women who liked George before are sure to swoon even more now!
1.4
Score
Popularity
Activity
Freshness
View Innovation Webinars

Sun Care Stickers
SPOTMYUV Alerts When Sunscreen Should Be Reapplied