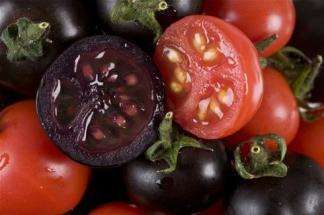 The genes from snapdragon plant (Antirrhinum) were combined with those from tomato plants, which then grew purple tomatoes. These purple tomatoes are rich in anthocyanins, which are thought to protect against some cancers, cardiovascular disease, age-related degenerative diseases, diabetes, obesity and other illnesses. Tomatoes are also rich in other useful bioactives, antioxidants, lycopene, and flavonoids.

Mice bred to be susceptible to cancer were fed purple tomatoes lived significantly longer than those who were fed a regular diet. Whether humans also get that benefit has not yet been shown.

Team member Dr Cathie Martin from the John Innes Centre in Norwich said, “Most people do not eat 5 portions of fruits and vegetables a day, but they can get more benefit from those they do eat if common fruit and veg can be developed that are higher in bioactive compounds.”
1.6
Score
Popularity
Activity
Freshness
Jeremy Gutsche Keynote Speaker