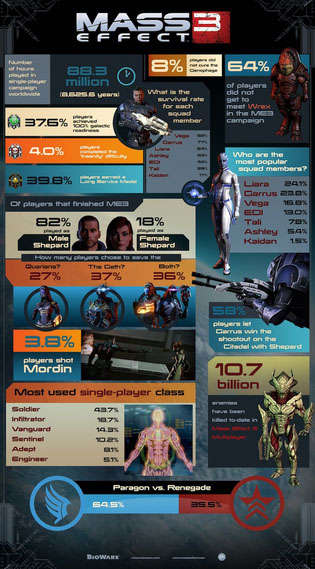 This Mass Effect Infographic Gives a Glimpse into Gamer Psychology

Andrew Sztein — March 26, 2013 — Tech
References: gamerant & kotaku
Share on Facebook Share on Twitter Share on LinkedIn Share on Pinterest
Mass Effect is a game series that encourages gamers to play according to the game play style and make choices that affect the outcome of the entire story. With so many options and possible outcomes across three titles, it becomes very interesting to see how the game was played by online connected gamers, which was collected through game console social networks like Xbox Live and PlayStation Network.

Seeing the percentage of what decisions players made isn't just interesting from a game play style perspective, but it's an invaluable glimpse into the overall psychology of gamers as a whole. For example, the infographic points out that only eight percent of players made one of the most evil decisions possible in the game, one that would wipe out an entire species in the game's universe. Sixty-six percent of gamers played the game as a hero. The infographic also gives a glimpse into how popular the game is by pointing that 10.7 billion players have been killed in the Mass Effect 3 multiplayer game.
1.6
Score
Popularity
Activity
Freshness
Get the 2021 Trend Report FREE